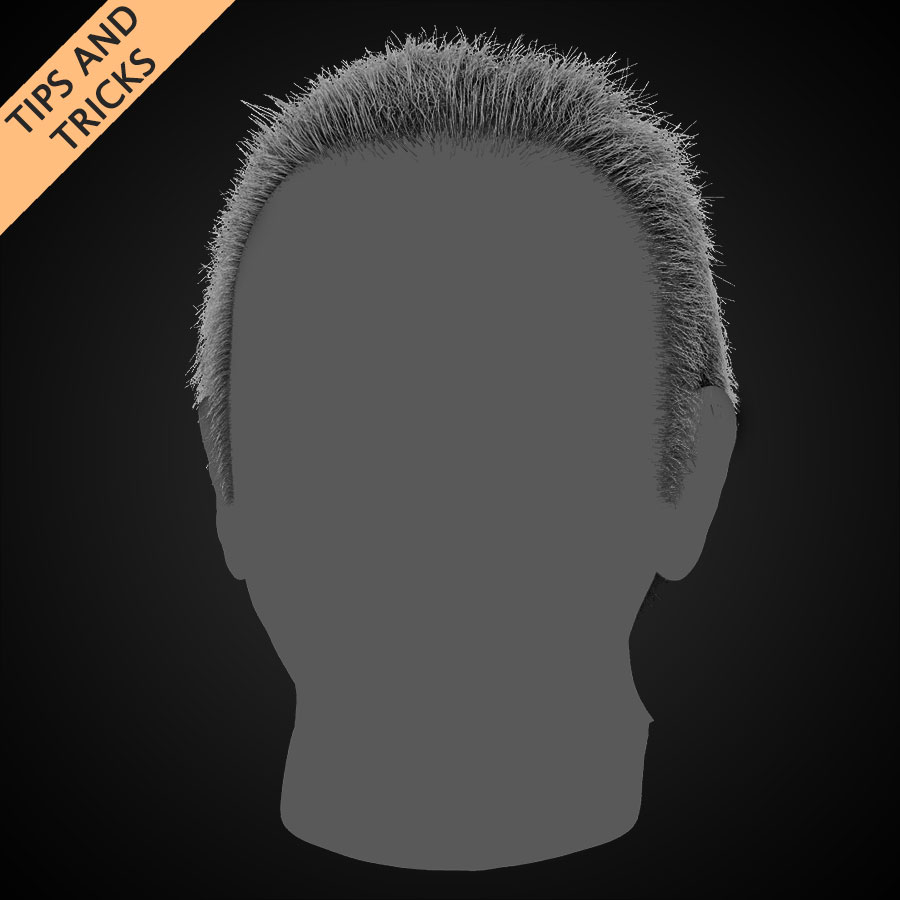 Doing hair -regardless of the art type- has always been an interesting topic to talk about among artists; due to its daunting challenges on the way. No matter what type of 3D hair you’re creating (real-time, rendered or sculpted), the way of thinking about it, the concept, is the same.

Let me make it clear at this point that if you’re looking for quality output, there’s no fast ways around it, you have to be patient and spend your time, deal with it.

Now, I’m not gonna write any step-by-step guides, because you can find loads of them on Google, and good ones, too. However, I’m here to talk about how to catch a fish, rather than giving you only one fish.

This article is written because one of my Reddit subscribers asked me about some explanations on doing hair. Due to the loads of work and lack of time, I couldn’t create the images of this article myself. So the images shown in the context (not the header though), are other artists’ works and I have no claims on them.

An Artist-Friendly Approach To Sculpt/Groom Hair

The basic idea, is to think of it as a sculpting process. Meaning that you have to do the Primary Forms first, then nail down the Secondary Shapes and finally the Tertiary Details. I’m gonna explain about each one and how to figure out each pass. As I said before, it doesn’t matter what sort of 3D hair you’re creating. This way of thinking, applies to all.

The primary forms, are the first step (after gathering and studying references which I’m gonna talk about in the end) of doing hair. If you ask about a clearer definition, I’ll put it this way: “The Primary Forms of hair, are the ones which define the overall volume of the hair, and the general silhouette (forget about the tiny fly-away hairs for now). The ones that are recognized by the audience if your character is in the darkness and there’s some light behind.”

The goal of this pass, is simply to cover most of the head and let no scalp skin be visible. Besides, to show the general recognizable hairstyle. 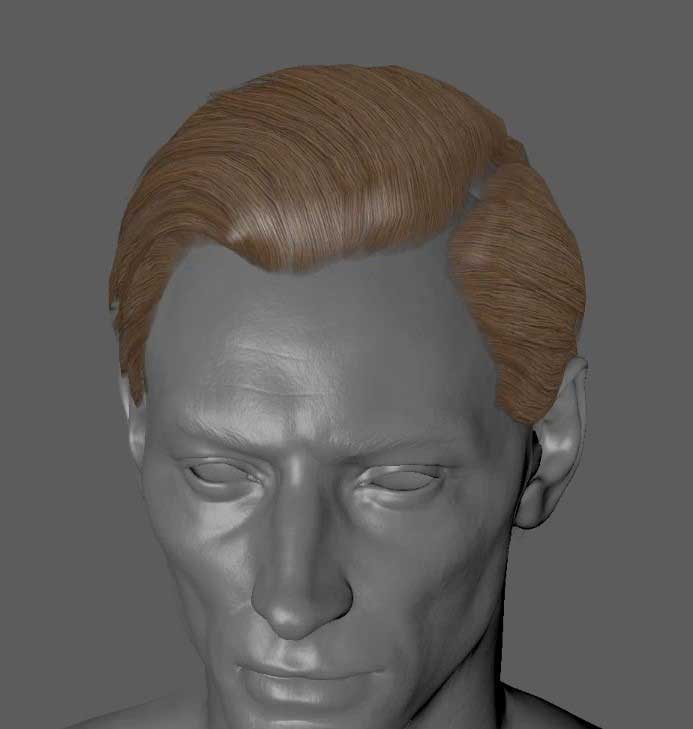 This image above is a good example of primary forms of hair. By Adam Skutt 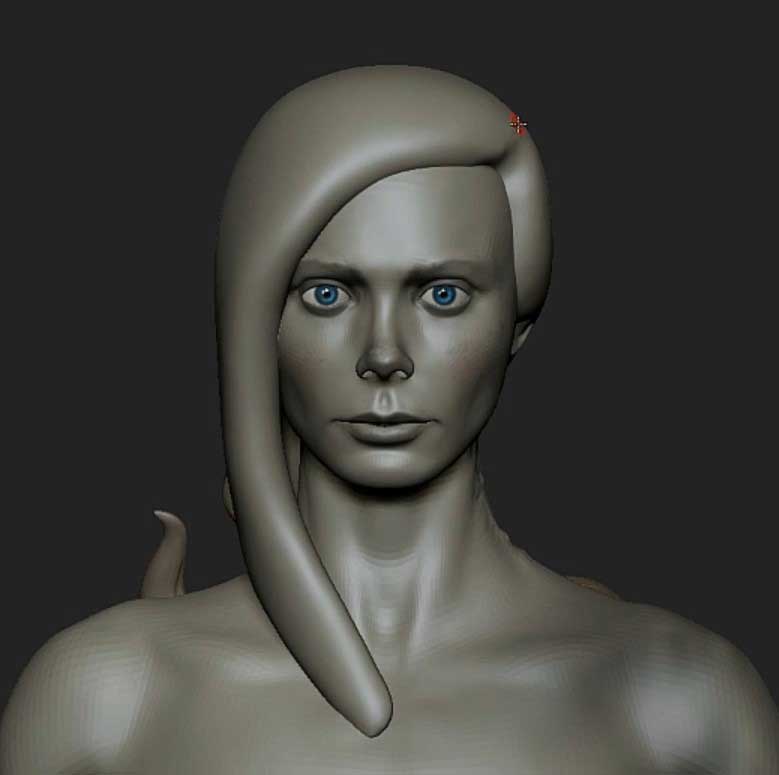 This one’s pretty basic. Obviously, there will be a lot more tweaking along the way. By Henning Sanden

The Secondary Shapes, live inside the Primary Forms. At this stage, you’re gonna add a bit more definition on top of what you had before. To put it in a nutshell, take one of your references on Photoshop and blur it. See those lines?! They’re the Secondary Shapes. 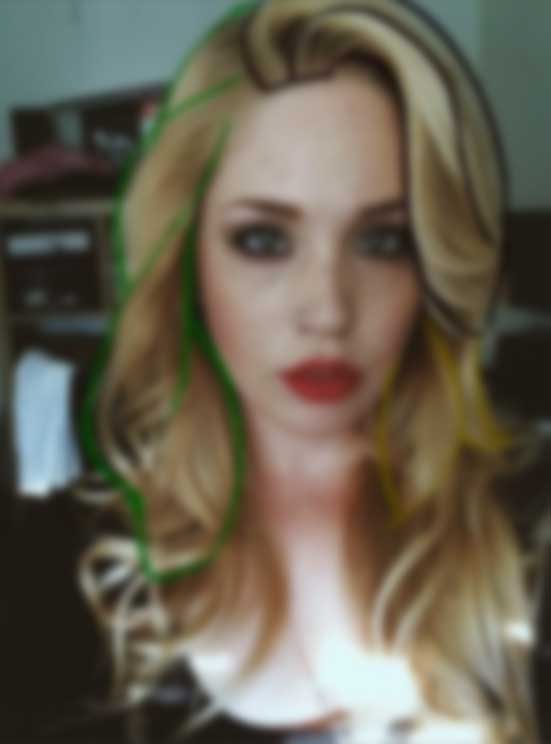 However, if you ask about the definition, I’ll reply: “The Secondary Shapes, are the ones that include hair breakups and the connectivity or the flow of the hair. They’re made of smaller strokes than the Primary Forms, and bigger ones than the Tertiary Details. They’re groups of hairs that are related to each other in a smooth flow.”

The goal of this pass, is to define the general flow of the hair, add a bit more detail to the silhouette and add color variations as well. This is where most of the fight-throughs happen as an artist. If you have this pass done, and blurred it in Photoshop and it still worked, you’re on the right track.

Just have this mind, that this pass should define big[ger] chunks of hair. Leave the tiny details to the final step. Don’t be obsessed with details too much for now. Try to focus on how those big chunks of hair are connected/related to each other, as this is a very vital step in the whole process. 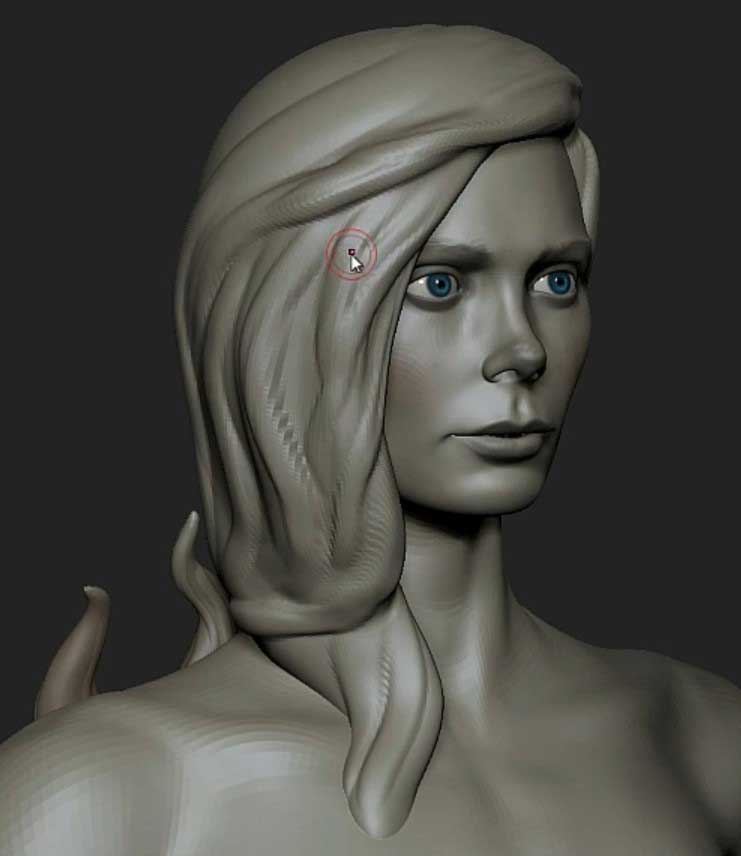 There will be a lot of back-and-forth process when sculpting hair. By Henning Sanden 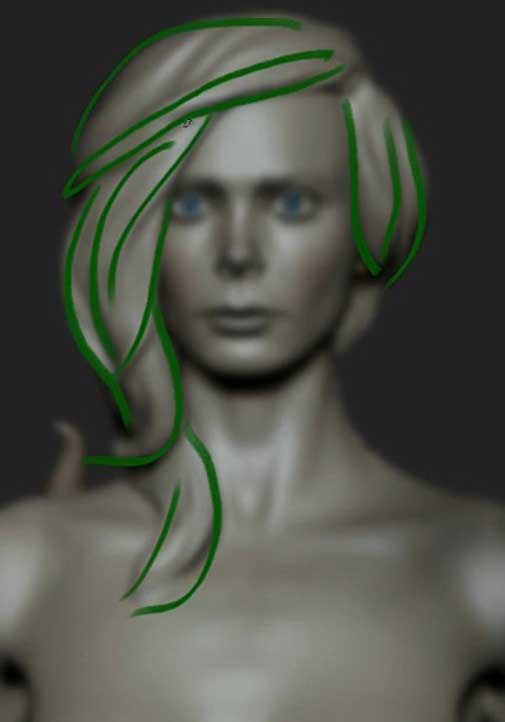 It just works! By Henning Sanden

The Tertiary Details; this pass could be more time-consuming, but I gotta say if the previous passes have gone as you would like, this is the fun part. The Tertiary Details define, well, the tiny details like single hair strands, and the fly-away hairs added on the silhouette. This pass is also supposed to add more randomness and breakups to the hair.

Another important aspect of this pass could be on the hairlines. The way hair touches the head may not look good/natural until this step. You have to try to add more single strands/lower-count chunks of hair to where the hair meets the scalp. This is a huge step to the realism, which most artist either forget, or don’t pay too much attention. 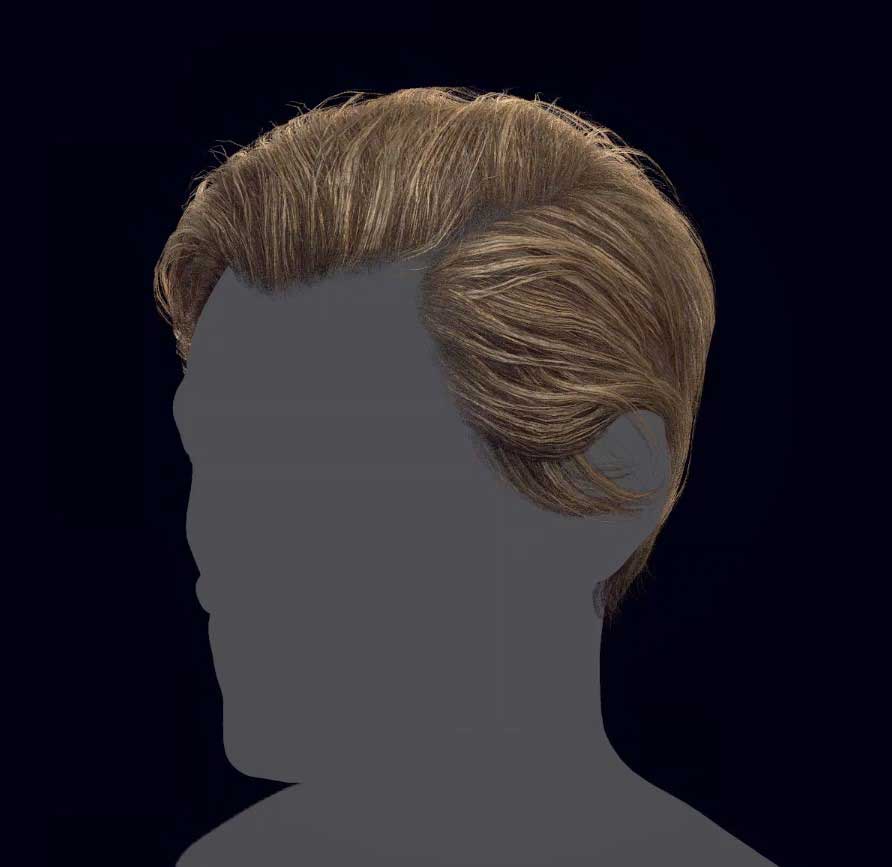 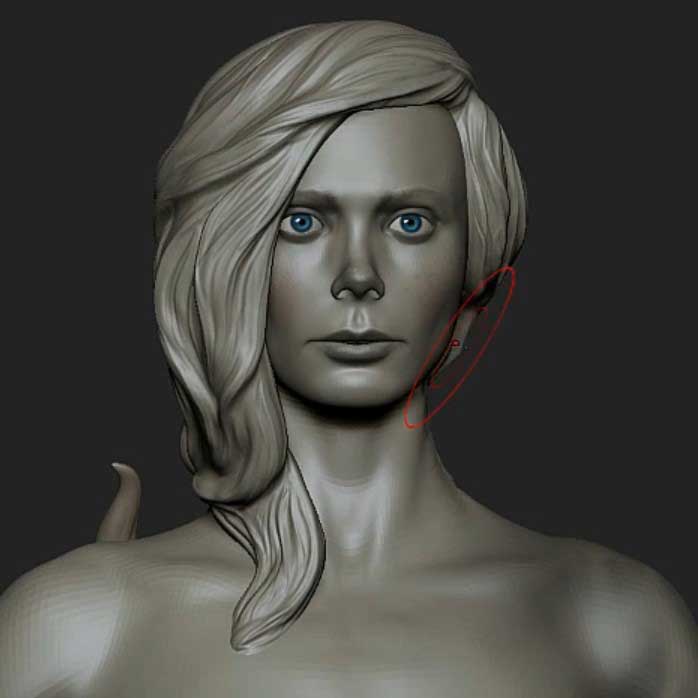 This sculpture is stylized, but you still can see pretty well that how tertiary details are executed when sculpting. By Henning Sanden

As always, it’s crucial to gather a bunch of references for the hairstyle you’re going for. A way of quickly studying you references would be to open them in Photoshop, and trying to determine the Primary Forms, the Secondary Shapes and the Tertiary details by doing some paint-overs.

When studying, have that blur trick in mind. Blur you reference image, and draw on the main lines you see. That will be the Secondary Shapes. Whatever not noticeably visible, is in the Tertiary Details pass.

Also by doing so, you can -for example- have an idea of how many hair groups you need in your texture sheet for you real-time hair. 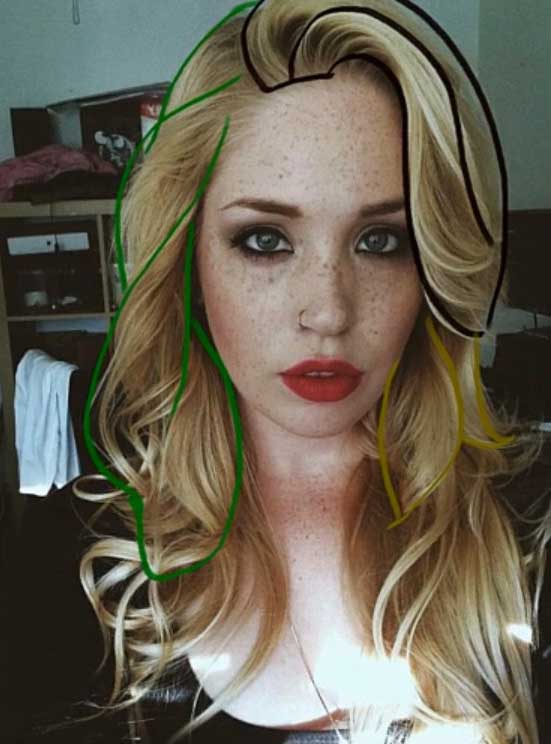 Note that the passes I talked about, are not totally separated processes and could be a back-and-forth workflow between them, which in most cases, it is. For example, you may need to adjust the Primary Forms while doing the Secondary Shapes. Just take your time, and don’t stick with what you already have. Don’t be afraid of changing, to be able push your art to the next level.

That’s it guys. I hope I was clear in explanation of the concept of breaking down the steps of doing all sorts of hairs. I’ll be happy to hear from you guys.